When did smartphones get so smart?

It might not seem like it, but mobile phones haven’t always been chock full of useful – and useless – applications, utilities and games. It’s not too long ago that GPS was only an expensive box stuck to the windscreen of your car, and only 16 years since the first camera phone was launched – although I’m not really sure 0.1 megapixels cut it as a photo even back then.

Although there have been plenty of ‘smart’ phones, the smartphone as we know it only dates back to 2007 when Apple combined the features we take for granted now – a proper touchscreen, a (half) decent camera, the internet and real apps that do stuff – into a user-friendly package. 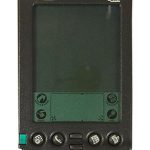 Probably the most revolutionary device – with every current smartphone using core features derived from it – was the Palm Pilot 1000, released in 1997. Ranked as one of the all-time top 100 gadgets by Time, the Pilot Personal Digital Assistant (PDA) had text recognition that worked (I’m looking at you, Apple Newton), scheduling, address book, to-do lists, memo pad and calculator, all packed into a lightweight body – in fact, it weighed less than an iPhone 6 Plus.

Mobile phones would tread a separate path before becoming fully-fledged smartphones, but your Samsung Galaxy or iPhone owes more to this little pocket wonder than the Nokia 1110 – eight years the Pilot’s junior, while being the best-selling mobile phone of all time with over 250 million units sold.

Up until 1999, phone displays were extremely frills-free, usually a very small mono LCD screen primarily just displaying the number calling or being called, along with signal strength and battery level – if you were lucky. The new Nokia 3210 took its lead from the PDAs of the time and introduced us to a more useful screen, simple games, MMS (a basic version) and the first vibrating ringer. The unprecedented popularity of the 3210 would truly open the door for full-featured smartphones in the years to come.

PDAs continued to evolve as standalone devices, getting incrementally more powerful processors, better screens – first with stylus-based touch, and later, the true touch screen technology that would also make its way into smartphones.

Unfortunately for the consumer, mobile phone manufacturers didn’t really add many new or exciting features in the following few years, instead concentrating on form by launching ever more baffling phones featuring sliding panels, clamshells, and other Star Trek inspired designs to make them the next must-have handset. 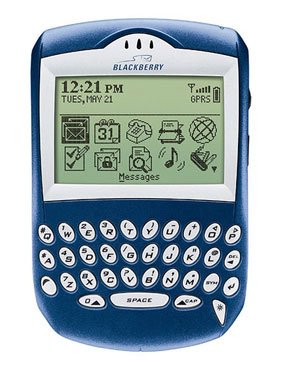 A giant step towards the smartphone was taken in 2003, however, with the launch of the Blackberry 62xx series (or Quark) – a groundbreaking design that combined all the functionality of the PDA with a usable mobile phone. Gone were the ridiculous headset and microphone add-ons required to make calls on a normal PDA – the Blackberry’s manufacturer Research In Motion (RIM) had effectively unified the markets with one fell swoop and delivered a mainstay of business connectivity for years to come.

Not quite a smartphone on its initial launch, but not far off.

As mobile users at the cutting edge were now beginning to have access to email and internet-based services, manufacturers made the smart decision to begin integrating 802.11 wireless networking in their new handsets. The first certified phones began to appear in 2004, with HP, Motorola and Nokia among the first to market.

The introduction of WiFi in mobile phones would allow manufacturers to start adding more and more data hungry features; and then… 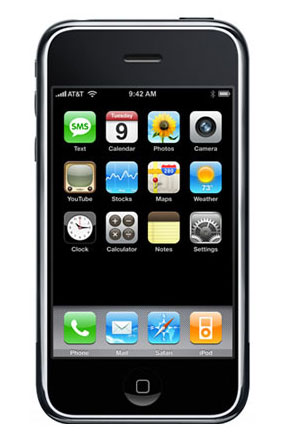 The mobile phone really got smart in 2007 when, to paraphrase Steve Jobs, Apple reinvented the phone. And to be fair, they did. With the iPhone, no longer were you tied to a few integrated packages, no longer did you need a slew of devices to work or play on the move; you didn’t even need an MP3 player any more – every single manufacturer was immediately trailing in the wake of this incredible piece of kit.

It’s worth pointing out though, that Apple didn’t necessarily come up with any of the concepts or features crammed into the svelte iPhone case. Okay, maybe the app store, but the rest:

The list goes on, but what Apple did do, was put all those features – and more – into an attractive and efficient form factor, welcoming every user into the new Apple ecosystem. I’m no Apple fan-boy by any stretch of the imagination, but they really left everyone behind in their digital dust. The only surprising thing here is that it took so long for anyone to put all these features together in a single package.

More power to the people… and more selfies…

It’s interesting that since 2007, new developments in mobile phone technology have been fairly few and far between. The march has been mainly toward bigger and better screens, faster processors, better and multiple cameras, more storage and the eternal quest for better battery life to power it all; not an awful lot of actual innovation, save for proper GPS, more apps and better networks to run on.

The thing is, what else do we actually want? Until someone much smarter than me works that out, we’ll be stuck with pouting selfies – and some very angry birds.