Our Smart City WiFi is the shape of things to come…

For more than a century, the New Statesman has been one of the leading progressive political and cultural voices in Great Britain.Founded in 1913, the august journal has chronicled the events and ideas shaping and changing the world, giving a platform to writers such as John Maynard Keynes, Bertrand Russell and Virginia Woolf.

“The Staggers”, as it is known, has now turned its attention to the cities of the future, a subject familiar to one of its founding supporters, the science fiction writer HG Wells.

In a new article, the New Statesman considers the demands of digitally-engaged consumers, a tribe of people that might have amused the author of The Time Machine. The title tells us that to attract the “affluent under-35 millennial segment”, city centres have to meet the demand for always-on connectivity. Which is where intechnologyWiFi comes in.

The New Statesman notes our successful deployment of free-to-access public WiFi across Edinburgh city centre following the granting of a 10-year concession by the City of Edinburgh Council.

It says: “In addition to providing opportunities for local advertisers to reach out to consumers directly, the new infrastructure has also helped to boost capacity on the existing 4G mobile data network and paves the way for the roll-out of a future 5G mobile data network.”

The UK is likely to see a tenfold increase in mobile data usage over the next five years, adds the New Statesman, warning that fulfilling this demand is becoming essential for city centres in attracting investment and remaining competitive.

A century ago, such concepts might have seemed fantastical to all but a few visionary writers like HG Wells.

But today, local authorities are waking up to the potential of our smart infrastructure, which creates a secure platform for consumers, businesses and technologies to engage and interact with each other.

Did H.G. Wells foresee the oncoming of smart cities? 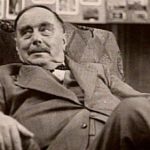 Victorian author HG Wells described a futuristic Utopia in his 1923 book Men Like Gods. “For in Utopia, except by previous arrangement, people do not talk together on the telephone,” he writes. “A message is sent to the station of the district in which the recipient is known to be, and there it waits until he chooses to tap his accumulated messages. And any that one wishes to repeat can be repeated. Then he talks back to the senders and dispatches any other messages he wishes. The transmission is wireless.”

So an access point, in other words… wouldn’t you say?